Assassin’s Favour is a divination card. A set of nine can be exchanged for a random unique dagger. 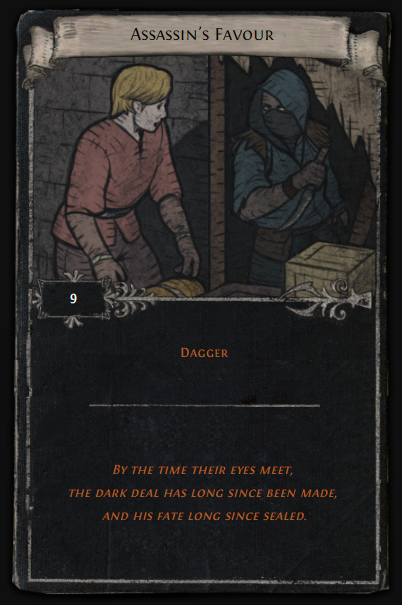 The Marketplace is an area in Act 3. This area has a waypoint and is connected to The Sewers (in the past The Market Sewers and The Warehouse District), The Catacombs and The Battlefront.
This area is divided into two large halves, which are connected by a paved road with dozens of gladiator statues. One area has the Warehouse exit, and the other contains the Catacombs near the area boundary, and the Battlefront randomly placed on the area boundary. Each side contains an entrance to The Market Sewers. The Sarn marketplace is filled with ruined buildings where merchants would sell their wares from a stall. Broken-down wagons and scraps of wood litter the ground. The quest item Decanter Spiritus can be found in an ornate chest.

The Quay is an area in Act 8. It is connected to Doedre’s Cesspool and the Grain Gate. Vaal side area Blind Alley has a chance to spawn.

I wish Mercenary and Rebel were used more often. The fact we had a set called “Revolt” with no Rebel in it was a shame.

This is uncommon in any set with those types in decent volume and potentially a common in any other set (or better yet, not printed at all in those sets). Putting this at rare or mythic rare would be insane. No, it shouldn’t, it’s a common and at 2B it would be a strictly better murder even without the reduced price clause. It would break limited. This is already pushing it for common. Stop thinking just in constructed terms, consider other formats and power creep.