Blind Venture is a divination card. A set of seven can be exchanged for a random corrupted unique ring. 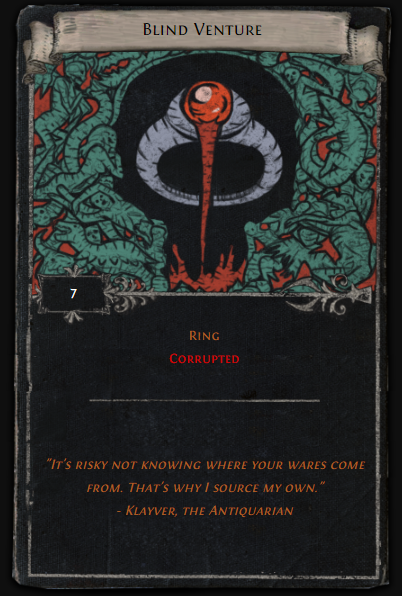 The Reliquary is an area in Act 5. This area has a waypoint and is connected to Ruined Square.

The Reliquary (Act 10) is an area with a waypoint in Act 10. It is connected to The Ravaged Square. Vaal side area Restricted Collection has a chance to spawn.

While on the topic of new card drop location I just got Volatile Power from The Mines level 1 or 2 (not sure which) on cruel.

I decided to run 100 Museum maps and record the results. This was because I was mostly interested in seeing how often the Dab of Ink divination card dropped and if it was a reliable way of farming Poets Pens. I thought I would give 100 maps a shot and see where it got me!

I finished the maps and logged pretty much everything I could think of throughout the maps. This will include the different events I encountered, the total currency I managed to farm and personal notable drops. I did all of the runs with the same IIQ (52% with a Bisco at 44%) and the same gear setup with Winter Orb as my clear skill. I cleared all the maps until less than 10 mobs left and opened all the chests I found on my way.

Before I get started on the loot I would just like to give my personal thoughts on the layout and clear speed of the map. I feel like the layout of the map is not the best the game can offer as you can view here . It feels like there is a lot of back and forth running about which makes it slower and so I would recommend another map layout if you want to farm faster. When it comes to the core reason I decided to farm this map (the Dab of Ink card chance) it felt quite decent at a drop every 20 maps which would seem realistic to farm your own Poet Pens (however I only did 100 maps so I can not be 100% sure on the drop chance).

Overall in terms of profit and the time it takes to run the maps I would not say it is the worst but not the best either, there are definitely more consistent/faster options for currency farming. I did, however, have a blast doing this, hopefully, it has helped give you some insight on if this is a map you would like to run yourself! If there is interest I would not mind continuing to post my results when I am mapping and I am open to suggestions of new maps to try.

Thank you GGG for making such a wonderful and emerging game, Betrayal has been the most fun I have had in my close to 3k hours played. Keep up the good work!

Picture of the loot

Let’s start out with the divination cards:

The main focus was the Dab of Ink cards. I got my very first in my first map and then I did not see another until map 43. My third card came in at map 49 and the fourth at map 80. My last card appeared on map 94. By the end on average, I had a card drop every 20 maps.

I did get a few divination cards from other sources which I feel is more random and based on how many strongboxes etc you find but they were:

Total profit was around 480 chaos

Other events/encounters — I did only log Abyss and Breach here but I should maybe have logged Essences and Rogue Exiles too but that will have to be for another time!

TLDR — I ran 100 Museum maps with a Winter Orb build, 52% IIQ with Biscos at 44% & the total value of my loot is roughly 480C. My total Dab of ink cards was 5. I Cleared all of the maps until less than 10 mobs remained and opened all of the chests I found. Overall the map is not one of my favorites to run, it’s a slow map with a back & forth layout. I feel like there are better options to generate faster profit and if you only want to do the map because of the Dab of Ink cards it would seem from the 100 maps I ran they have a semi-consistent drop rate but realistically it is probably faster to run a more profitable map and buy them directly from players unless you are an SSF character.