The blue dragonflight are dragonkin that have blue-white scales and can breath frost or arcane magic. During the ordering of Azeroth, the titan Norgannon blessed Malygos and his flight with power over the arcane and the duty of ensuring it would never be abused. Malygos and his mate Sindragosa ruled the blue flight until the War of the Ancients when the crazed Deathwing used the Demon Soul to wipe out the majority of the flight, leaving only Malygos and precious few eggs left. The event left Malygos both weakened and depressed. The flight slowly but surely recovered over the millennia, until the ambitious young dragons Kalecgos and Tyrygosa attempted to bring Malygos out of his stupor.

When Malygos was slain near the end of the Nexus War, the dragonflight was unsure of who would become the new leader and ultimately the new Aspect. After some time passed Kalecgos was appointed by the majority. After the destruction of Deathwing and the Dragon Aspects’ becoming mortal, the blue dragons were left in a state of disarray. More and more left their home at the Nexus daily, until finally Kalecgos declared the flight disbanded and all blue dragons free to follow their own individual desires. In Azsuna, the ancient blue wyrm, Senegos, leads a large brood of surviving blue dragons. 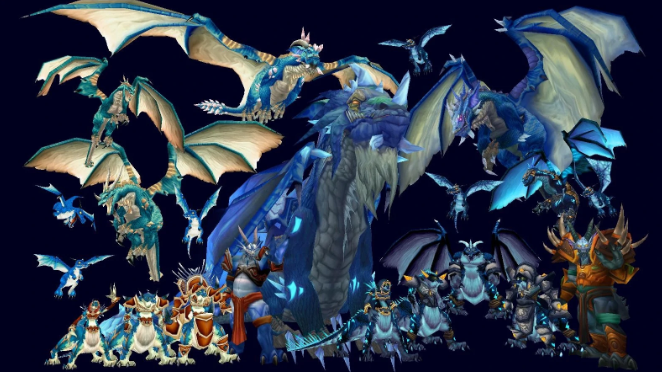 The blue dragonflight, while ruled by Malygos, the lord of magic, was all but devastated by the evil Deathwing and his black dragonflight. Though there are few great blue dragons left in the world, their magical powers are awesome to behold. Native to Northrend, the few blues stay relatively close to the great Dragonblight, where they commune with the ancient dragon spirits who died in ages past. Their freezing breath and gargantuan claws have been the death of many hapless travelers in Northrend.

Magic is what most concerns the members of the blue dragonflight. Acquiring it, researching it, cataloging it. Blue dragons are masters of the arcane and they wield it with a natural, almost intrinsic, ease. Even the flight’s dragonspawn armies are flush with magical aptitude. The blues believe that with this power comes a certain responsibility and so members of the blue flight can often be found in positions policing and monitoring the use of magic by non-dragons.

Their traditional home is Northrend, where they remain close to the great Dragonblight. Historically, blue dragons have had a reputation for spending their days in solitary contemplation of the secrets of the world, but in recent times blue dragons have proved to be more social due to the growing threats to all living creatures. Their approach towards mortals, specifically arcane spellcasters, can vary anywhere from amiable curiosity to outright hostility.

Of all the dragonflights, the blues are the ones most drawn to order and calmness. Ironically, this made them the ones least able to deal with the chaos caused by Malygos’ insanity and eventual death.

Blue dragonkin are sometimes referred to as Azure, Cobalt or Sapphire. When taking humanoid form, most blue dragons prefer to transform into humans, though dwarf, gnome and quel’dorei guises are also common.

Several blues are somewhat bitter after the events of the Nexus War.[citation needed]

Members of the blue dragonflight most often have names ending in “gos” for males, or “gosa” for females. Sometimes synonyms of the word “blue”, or terms relating to spellcasting find their way into their names as well.