Bowyer’s Dream is a divination card. A set of six can be exchanged for a normal Harbinger Bow with six linked sockets and item level 91. 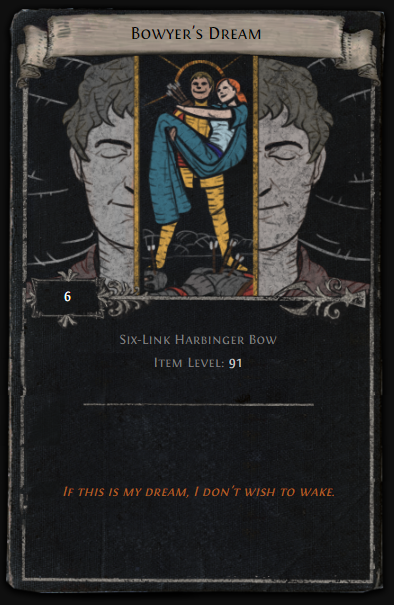 Bowyer’s Dream can be dropped in the following areas:
Lord of the Ashen Arrow of Ashen Wood Map

Exchange currency item is one of the best way to obtain Bowyer’s Dream.

Does Bowyer’s dream have a new drop restriction?

I have seen the card around on poe.trade (essence) and according to the wiki page, which is not updated since last February, it drops from Lord of the bow. Now that Lord of the Bow is no longer around in Arachnid Nest or Canyon, does the card still drop from the new bosses in Canyon or Arachnid Nest?

I think ashen woods is the new map with a lord of the bow boss and is probably the only place that bowyers dream drops now. I just got the bowyer’s dream from the boss of ashen woods.

It dropped in the boss’s room, but I don’t know if it specifically dropped from the boss or not.

Fun fact, I also found my first ever 6 links in the same map.

Do shaped maps have a higher chance to drop divination cards?

Yes. Shaped maps can have higher tier mods which give more item quantity. Higher tiers can have higher mods that give bonus quantity and quality and also higher-level sextants can give extra. Still don’t know if they actually drop more until tested but in theory.