Your awakening was unprecedented, but the time has come to claim your place in the world of Azeroth. The Dragon Isles are waiting for you to discover your purpose and awaken your wing mates in your new adventures. You will not be so easily contained.

Created by Neltharion the Earth-Warder the essence of dragons was combined with the adaptability of the mortal races to create an elite soldier capable of switching from a draconic form to humanoid form. Long in a magical stasis, they are now awakening to a new threat within the Dragon Isles. It is in the Forbidden Reach that the dracthyr will start their journey to reclaim their fractured memories and face a new reality.

Dracthyr Evokers are a new Hero class and begin their adventures at level 58. Creating your first dracthyr has no restrictions other than it requires Dragonflight and you are only able to have one dracthyr per realm. Subsequent dracthyr can only be created once there is a level 50 (non-dracthyr) character on the realm you wish to create it.

You will also choose your faction on character creation along with all the various elements that make your dracthyr uniquely— you. There are a multitude of options and combinations you can choose. (We wish you luck in your endeavor. You’re going to need it.)

Dracthyr Evokers freely switch between two customizable forms—choosing between a humanoid visage, and a fearsome draconic form to battle foes and overcome obstacles.

Dracthyr Evokers seek to forge their own path in Azeroth, and willingly fight for the Horde or the Alliance.

Delve into the story of the Dracthyr in a brand-new starting experience and learn how to use your new abilities before venturing forth.

Dracthyr Evokers can fight from mid-range with claws and fiery breath attacks (Devastation) or draw upon the life-giving magic of renewal to bolster their allies (Preservation).

Dracthyr Evokers can empower their draconic abilities through magic. Charge-up your attacks and unleash them at the right moment to maximize their effects.

The Color of Magic

Dracthyr Evokers were created to wield the magic of all five dragonflights providing a very distinctive style of spell casting. You will be able to see the coalescence of these powers each time you cast. Evokers also have two distinctive specializations which take advantage of these magic types: Devastation and Preservation.

Devastation is a ranged DPS specialization that uses the power of the red and blue dragonflights to do devastating damage to their foes.

Preservation is a healing specialization that uses the power of the green and bronze dragonflights to heal their allies in battle.

Each ability associated with a dragonflight will have the name listed both in the spellbook and in the tooltip. 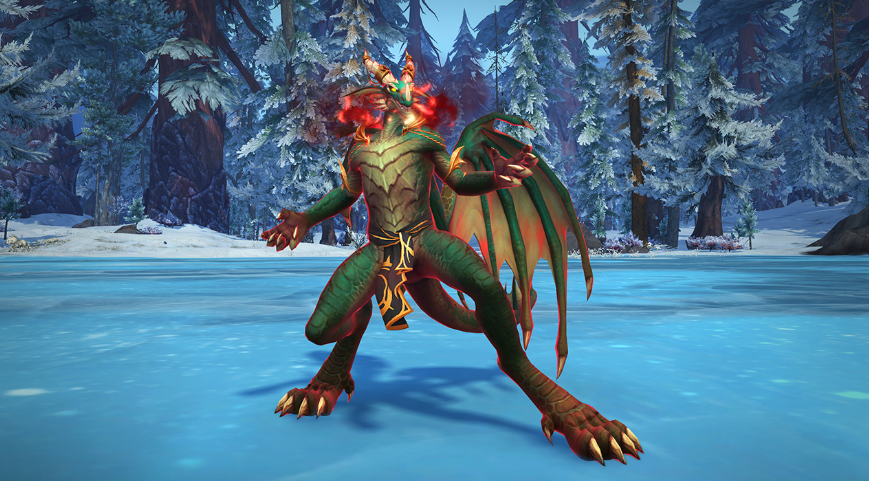 Dracthyr Evokers have special Empowered abilities that they can use to change the strength of the spell or ability they are casting. By holding down a button on your keyboard or mouse, you will power up a spell. The longer you charge the spell, the more damage it could do or the more targets the spell could hit.

For example, one Empowered spell first learned is called Fire Breath. Fire Breath can be powered up as a Level I, Level II, or Level III spell. An indicator bar will appear when casting to display the level of the spell that will be cast. Releasing the button or moving before completing a cast will stop the spell from going off provided it hasn’t reached one of those levels. Releasing the spell when the indicator is within the range of the level indicated will cast at that level.

At each level, the amount of damage done when using Fire Breath is increased. Not all Empowered abilities are alike, and over time, you will learn how to make the most of them.

Dracthyr have two racial abilities that truly embrace the nature of this race: Wing Buffet and Tail Sweep.

Wing Buffet: With a powerful flap of your wings, knock away your enemies in front of you.
Tail Sweep: Lash out with your tail, knocking enemies within 6 yards into the air.

You will also learn to Glide which you can activate by using the jump key while falling to slow your descent.

Better than simply gliding slowly to the ground beneath you, you will also learn how to Soar for a time to move around the land. To get the most lift to your loft and go the distance, you’ll want to hone your timing and start from a higher elevation such as the edge of a cliff.

Soar: Muster your strength and launch into the air.

There are several other base abilities that will enhance your time spent as an elite dracthyr Evoker including the Living Flame spell which you can use to either damage enemies or heal yourself.

Living Flame (Red): Send a flickering flame toward your target, dealing Fire damage to an enemy or healing an ally.

Select spells and abilities require a resource known as Essence. This is displayed under your character portrait as five small opalescent globes and will automatically refill over time. One such spell that uses Essence is Disintegrate, which is the first spell you will learn as you progress through the starting area for the dracthyr.

Disintegrate (Blue): Tear into the enemy with a blast of blue magic, inflicting Spellfrost damage, and slowing their movement speed.

Players will menace their foes (or empower their allies) as the new dracthyr Evoker, World of Warcraft’s first-ever race and class combination. Able to switch between a humanoid visage and a fearsome draconic form, the dracthyr are highly mobile, and their unique Evoker class can specialize in ranged damage-dealing or in aiding their allies as a healer by harnessing the mystical gifts of dragonkind. They’ll awake from their slumber in the Forbidden Reach, where they’ll take up their training to join the forces of dragonkind in the defense of the isles.