The dracthyr are an ancient race of humanoid dragonkin. They have the ability to wield the magic of all five primary dragonflights as evokers, and, like true dragons, shapeshift between a draconic form and a humanoid visage. The dracthyr were created in the ancient past by the black Dragon Aspect Neltharion, who combined the essence of dragons with the adaptability of the mortal races to create a race of ideal soldiers. Neltharion fashioned the Forbidden Reach off the coast of the Dragon Isles to serve as the dracthyr soldiers’ training ground, but after a terrible battle, the island laid dormant and abandoned for ages. Recently, however, the return of an ancient enemy caused the dracthyr to stir, and they now seek to forge their own path in Azeroth by joining both the Alliance and the Horde. 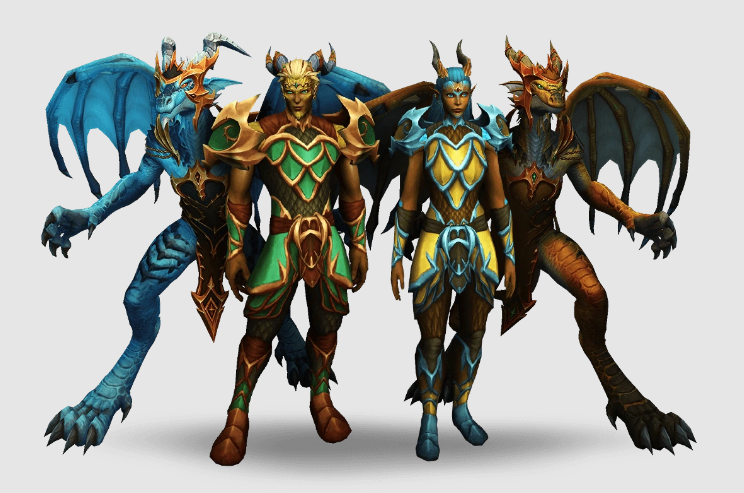 The dracthyr were created by Neltharion the Earth-Warder, Dragon Aspect of the black dragonflight. While other dragonkin were sturdy and loyal, they lacked the cleverness and adaptability needed to fight the war that Neltharion felt was sure to come against those who defy the reign of the Aspects. They would embody the might of all five dragonflights, instilled with the potential of the mortal races that had begun to spread across the world. They were to be ultimate soldiers. Neltharion fashioned the Forbidden Reach as secret training grounds for the dracthyr, but in the aftermath of a terrible battle, the island lay dormant and abandoned for ages.

The dracthyr were ordered to the creches beneath the Forbidden Reach by Neltharion where they were sealed away by Malygos in magical stasis and watched over by his blue dragonflight. They remained there, abandoned and forgotten for nearly 20,000 years, awakened from their long slumber only when the Primalists returned to break Raszageth free, as an ancient, magical surge rippled through the Forbidden Reach, the dracthyr awoke, but from their long stasis their memories became a blur.

As a powerful storm was unleashed by Raszageth the dracthyr evacuated the Forbidden Reach, the only home they ever knew. After Raszageth’s attack, Obsidian Warders dracthyr journeyed with Wrathion to Stormwind were they joined the Alliance, and the Dark Talons dracthyr journeyed with Ebyssian to Orgrimmar were they joined the Horde. While there these dracthyr learned about visage forms from Ebyssian and Wrathion and were able to adopt mortal visages in order to better commune with other races.

The dracthyr army is divided into factions called weyrns, with each dracthyr assigned to a weyrn that best matches their skills. Each weyrn is led by a Scalecommander, a dracthyr chosen and groomed for the position by the Earth-Warder himself. Members of a weyrn are as close as clutch-mates; it is a bond that shall never be broken, forged of duty and honor in service to dragonkind.

Every dracthyr is an expert soldier. Whatever weyrn they serve, they use their talents to defend dragonkind in obedience to the Earth-Warder. Yet even among such illustrious ranks, there are a select few who transcend the skills of their kin. Who are able to master the specialties of all weyrns and shift between roles at will. These are the evokers. The best of the best, finest of the finest.

These elite forces possess the rare potential to focus their essences into an instrument of preservation or a weapon of devastation. The journey to such mastery is long, and few dracthyr can see this path through. But those who learn to harness their full potential shall be honored with the title of evoker.