How To Get To Badlands WoW

if your alliance, travel through from ironforge into dun morgh too loch modan and then you enter badlands.

if your horde, go from orgrimmar too grom gol then travel through stranglethorn vale. into duskwood then head towards redridge and then go from redridge too burning steppes (50+ zone) then too searing gorge (45-50) and then you enter badlands.
that or the lower level route that takes longer from undercity all the way down too loch modan.

or get level 44 and enter the zone through the travel quest which is the easiest way.(as an horde)

The Badlands is an arid and desolate region in Khaz Modan accessed via the Searing Gorge to the west and Loch Modan to the north. Only the hardiest of creatures can survive in the arid wastes, such as feral coyotes, cougars and buzzards. The black dragonflight have a pronounced presence in the area, mainly in the Lethlor Ravine and, later, in the Dustbowl. Scattered across the Badlands are camps of the Dustbelcher ogres.

Despite its position between Stormwind and Dun Morogh, the Badlands have traditionally been Horde territory, though the Alliance have recently established the encampment of Dragon's Mouth in the western part of the region. To the north of Dragon's Mouth lies the Horde stronghold of New Kargath, built after its predecessor was buried by an avalanche during the Cataclysm. In the east is the goblin town of Fuselight and its sister port town, Fuselight-by-the-Sea, both controlled by the neutral Steamwheedle Cartel. In the west, a massive, charred ravine called the Scar of the Worldbreaker was formed when Deathwing passed through the area.

In the northeast, near the border with Loch Modan, lie the ruins of a titan-forged fortress known as Uldaman, home to titan-forged earthen, savage troggs, and much information about the origins of the dwarven race, while the smaller Tomb of the Watchers has recently been unearthed in the center of the region. As a result, the Alliance-affiliated Explorers' League, the dwarven Dark Iron clan and the blood elven Reliquary are fighting for control over the ruins and any titan artifacts that may lie within. 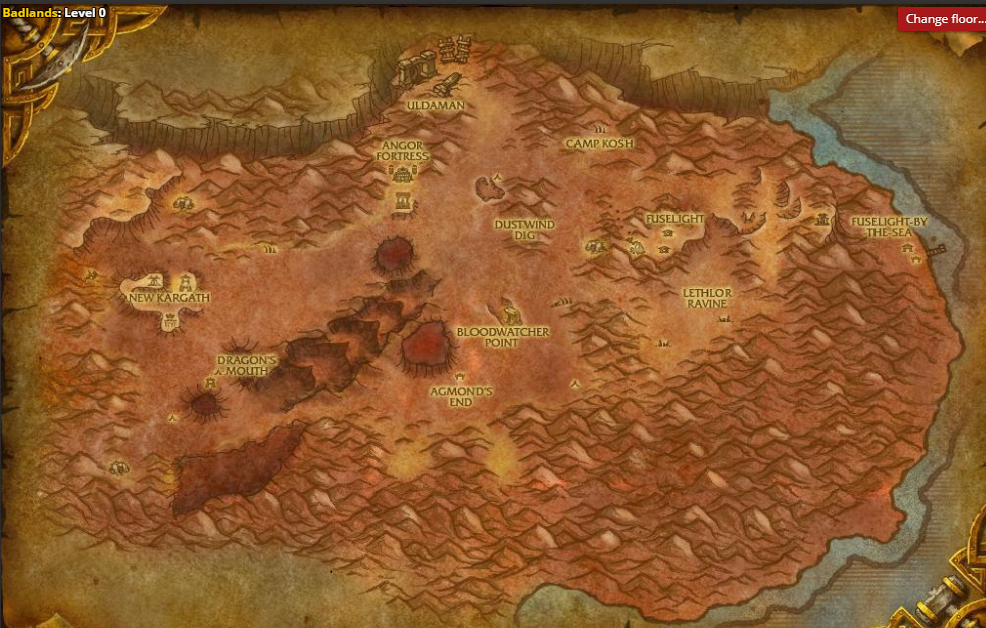 Players can access the zone by using a rocket from Light's Hope Chapel in the Eastern Plaguelands that goes to the goblin port, Fuselight-by-the-Sea, with the quest   Fuselight, Ho!.

It is also accessible on foot by a mountain pas from the Searing Gorge, or alternatively, from Loch Modan, by a ramp that leads down the chasm between the two zones and another one back up.

The Badlands is a high desert valley, bone dry and hot. The Searing Gorge is to the west, while the lush Loch Modan is located in the mountains to the north. Searing winds blow the heat around but do nothing to cool this sweltering land. The harsh environment allows only the heartiest plants — cacti and shrub brush — to survive. You can bring plenty of water, but it still might not be enough. It is advised for you to read up on your desert survival skills before coming here, travel at night and sleep during the day.

The Badlands are rocky and flat. Mountains to the north block cool air and moisture from Loch Modan. Canyons surround the Badlands, and they are rife with lions and vicious humanoids. Only the hardiest plants and animals survive — withered trees, cacti, scorpions and bobcats. The landscape also hides rock elementals. The smaller ones are easier to kill. Run from the bigger ones unless you want to see what you look like as a pasty smear on the ground.

The second quickest route (assuming you don't already have flight points in Arathi or Hillsbrad) makes use of a teleporter in Booty Bay, accessible via a short quest chain that starts in Orgrimmar. This path goes through two low-level Alliance regions, so is more risky on PvP servers, but fairly easy on PvE servers. If you are a level high enough to survive in the Badlands, you should not have much problem. Do the following:

A more traditional route overland route runs from the Undercity through five other regions. With care, this can be done by level 20+ characters, but the distance is quite long so a travel form or mount is recommended. Of course, if you have one of the flight points listed below already, fly there from the Undercity and then continue from there.

An overland approach also exists from the south, but it is even longer and much more dangerous, heading through a couple level 50+ regions: