How To Get To Deadwind Pass

How do I get to Deadwind pass?
Deadwind Pass is a contested zone located in central Azeroth, joining the southeastern reaches of the Kingdom of Stormwind (via Duskwood) from the east to the Swamp of Sorrows (and, eventually, the Dark Portal in the Blasted Lands) from the west.

Alliance
From Darkshire in Duskwood, simply follow the road east into Deadwind Pass.
Horde
It is a little more difficult for Horde to reach the pass. Head north through Duskwood from Stranglethorn Vale, skirting alliance camps and the town of Darkshire. The road east from Darkshire leads into Deadwind Pass. For those who have already been to Swamp of Sorrows, the road west from Stonard also runs into the Pass. 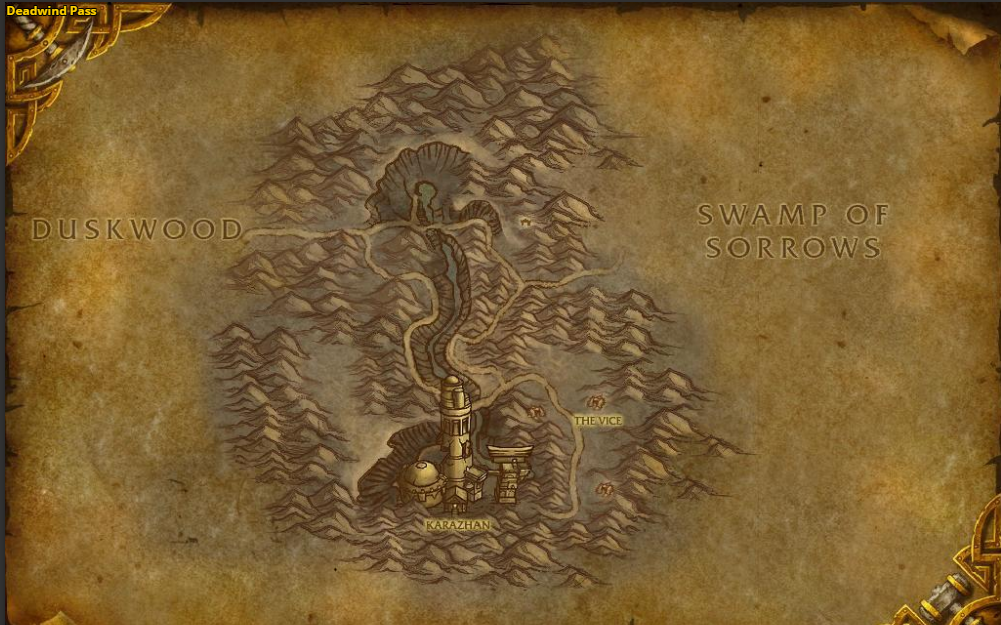 Deadwind Pass is a contested zone located in central Azeroth, joining the southeastern reaches of the Kingdom of Stormwind (via Duskwood) from the east to the Swamp of Sorrows (and, eventually, the Dark Portal in the Blasted Lands) from the west. It was, a score of years ago, considered a part of the Redridge Mountains.[1]

The Ivory Tower of Karazhan, once the dark wizard Medivh’s seat of power, stands in the center of this jagged region and leaks evil magic into the land. The trees are petrified and leafless, and a terrible wind keens through the canyon. Ogres, demons, undead and a few human gypsies roam the interior. Deadwind Pass connects Duskwood and the Swamp of Sorrows, and travelers are advised to move quickly — whispers tell that a new force has claimed the Ivory Tower, and that the ogres and demons are under its sway.[2]

This land is dead. The remaining trees are leafless and petrified, leeched of life by the tower's foul magic. The wind smells foul and dead, and the lightning storms are of concern to travelers carrying metal weapons. Undead and demons move over the land, refusing to allow it any chance of healing itself. In clear view of the road, scarecrow-like totems hang from the trees, a warning to remain on the path. The weather is in one of two states: threatening to storm or stormy. The main pass is through the middle of the region, and one must travel to the south to reach the cursed Ivory Tower of Karazhan. Few people wish to travel there, and few ever return. The few who have returned never reached the tower; attacking ogres forced them back before they came within sight of it. Besides the ogres, travelers must watch for harpies in the canyons.

Although Deadwind does have a handful of inhabitants, few are likely to run across them if they are just passing through. The Deadwind ogres comprise most of the population. The ogres are dedicated to cleansing the region of all interlopers, lead by a "master". These ogres dress in foul rags and carry crude, rough weapons. They are the biggest, most obvious threat to travelers and why most caravans and groups go heavily guarded.

The humans of the region are travelers, carrying their homes on their backs and trying to stay one step ahead of the ogres, demons and undead that haunt them. They do not recognize the Alliance or even ask its aid. They simply move from place to place, fighting for their lives, stolidly proclaiming Deadwind Pass as their home.[7]

This region is barren and devoid of any useful resources - herbs do not grow here, and there are no precious metals to be found. The only wildlife to speak of are carrion birds.

The raid dungeon Karazhan can be found in this zone. Other than that, there are no dungeons of any kind and no battlegrounds here. In addition, there are no travel hubs - players will have to rely on the nearby towns of Darkshire (Alliance) and Stonard (Horde) to access this zone.

In the northern part of the region is an abandoned camp that is labeled "Ariden's Camp".

If merely passing through, the only mobs travelers usually come across are vultures and wisp-like sprites, all of which are aggressive and will attack on sight. As one goes further south, though, one will come across a tribe of Deadwind Ogres living around the bend in the road leading to Karazhan. They live both along the roadside and within the nearby caves. In addition to the ogres and vultures, many undead aggressive spirits haunt the remains of the town at the base of Karazhan, far south down the road, whose villagers were slaughtered by Sataiel long ago. Their presence also extends deep underground. There are open cellar entrances in two of the ruined houses which will lead to catacombs and caverns filled with these ghosts.

Of course, there is the tower of Karazhan itself, which dominates the southern area of the pass. Karazhan is a level 70 10-man instance in World of Warcraft: The Burning Crusade.

Deadwind Pass is also known to be the origin point of a mysterious regime known as the Dark Riders, who have been sighted in Duskwood when they slaughtered a family of farmers in search of the Scythe of Elune.

As of the 2.0 patch the undead surrounding the tower are level 67-70. Players of much lower level should be careful to avoid running in, as the ghosts have a large aggro radius and would be very hard, if not impossible, to kill. Thankfully, they should not prove much of a threat for the level 70 adventurers who come here to brave the dangers of Karazhan.