1. How to get to Korthia WoW

Players initially get to Korthia via the Beastwarrens in the Maw, southeast of Desmotaeron. They quickly unlock a Waystone to Oribos, which activates its pair in the Ring of Transference in Oribos, as well as an Animaflow Teleporter to Ve'nari's Refuge.

Initially, you can reach Korthia by running through the south area of the Beastwarrens in the Maw. There will be two exits that lead to Korthia in Chains of Domination.

Once the Chains of Domination Campaign quest Opening to Oribos is completed, a portal to Korthia will open in Oribos, by the northwestern portion of the Ring of Transference area. This is a two-way portal, as you can return to Oribos from Korthia at the obelisk found in Keeper's Respite.

At the beginning of the Chains of Domination Chapter 3, Focusing the Eye, another way into Korthia is opened - On the quest Ease of Passage, a link between Ve'nari's Refuge and Korthia is established, with an Animaflow teleporter connecting both zones. The Animaflow teleporter will be behind the Obelisk in Keeper's Respite, and to the right of Ve'nari in Ve'nari's Refuge.

How to unlock Korthia

As part of his ongoing schemes, the Jailer has located a long-lost domain of the Shadowlands—Korthia, the City of Secrets—and dragged it from the hidden byways of the In-Between into the Maw. In this new area, you’ll team up with the covenants under a unified banner to fight against the endless forces of the Jailer, and work to uncover what obscurities he seeks in this forgotten realm.

Unlock the secrets that Korthia has to offer:

As part of his ongoing schemes, the Jailer has located a long-lost domain of the Shadowlands—Korthia, the City of Secrets—and dragged it from the hidden byways of the In-Between into the Maw. In this new area, you’ll team up with the covenants under a unified banner to fight against the endless forces of the Jailer, and work to uncover what obscurities he seeks in this forgotten realm.

The prophecies of Korthia foretold of the day when one who walked the Maw would save the Shadowlands from disaster. Perhaps this is that day. 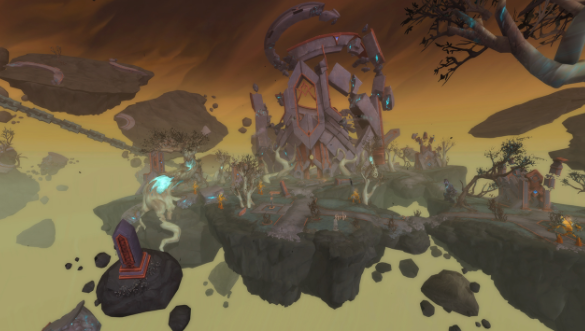 Fearsome wildlife roams Korthia, hardened from eons of adaptation. Be on your guard as you explore this primordial land.

When compared to the Maw, Korthia is a traditional zone, with multiple quest chains and a daily quest hub.

Players travel to Korthia alongside Ve'nari to unlock access to a new Waystone to Oribos, allowing the covenant combatants to freely cross over to the zone and back.

Later, they go on some exploration and recovery missions to locate the missing fatescribe and recover a Shadowlands relic.

Return to the Maw with the restored strength of the kyrian, necrolords, night fae, and venthyr and together strike back at the Jailer in Covenant Assaults. Twice a week, you can help the covenants’ forces fight the Maw’s monstrosities. Each Assault is led by one covenant and assisted in part by a second covenant, both of which need your help to complete four quests on the battlefront to take over key locations within the Maw. Successfully completing the onslaught will reward you with reputation for the leading covenant, the assisting faction, and the new covenant coalition, Death’s Advance. You’ll also receive a War Chest filled with Stygia and Soul Cinders, a currency used to further upgrade your legendary items. It may also contain mounts, legendary crafting materials, or equipment.

At the forefront of the fight for the Shadowlands are the covenants’ champions you met along the way while leveling and questing. Visitors from the covenants change daily, and each will offer you repeatable quests. Turning in dailies will reward you with reputation for the new Death’s Advance faction. You’ll also earn reputation from the quest giver’s associated covenant (e.g. venthyr visitors will grant Court of Harvesters rep).

For your contributions to the Death’s Advance’s cause, you’ll gain their favor and will be able to purchase several cosmetic rewards, including covenant armor appearance sets.

Korthian attendants have committed their existence to researching relics from across the Shadowlands. Led by their Archivist, they are dedicated to recovering the relics scattered across Korthia in the wake of the mawsworn invasion. Aid their cause by returning any Relic Fragments you find to Archivist Roh-Suir in return for The Archivist’s Codex faction reputation and a new currency, Catalogued Research. You can exchange Catalogued Research for a variety of rewards including Conduit and equipment upgrades, a flying mount, and a cosmetic appearance for your cloak.

Mount Up In The Maw

Disrupting the Jailer will weaken his hold in the Maw and bolster the confidence of your mounts to let you ride them into battle. To saddle up on your trusty steed in this ominous realm, you’ll first need to complete the introductory storyline to Korthia. Once you complete the quest, you’ll receive The True Maw Walker reward, which allows you to summon and ride all ground mounts in The Maw and Korthia on the character who earned it.

During your journey through the Chains of Domination storyline, you’ll be able to diminish the dangers of this desolate realm during the “Focusing the Eye” quest, which permanently removes the Eye of the Jailer effect. With the eye no longer tracking your every move, you can freely roam the Maw without penalty and stay in this forbidden place for as long as you please.

Along with exploring Korthia, you can now traverse the previously inaccessible terrain in the Maw, Desmotaeron. This land withers under the shadowy palm of Helya herself, where she tortures souls as her contribution to the Jailer’s schemes. It is here that you’ll also find the entrance of the new 10-boss raid, Sanctum of Domination.

While eradicating the Maw of the Jailer’s forces, his conniving lieutenant Kel’Thuzad will occasionally dispatch Tormentors to maintain their icy grip over the Maw. Slay Mawsworn minions to draw out these powerful adversaries that will stop at nothing to pulverize you into a pile stygia. Defeating a Tormentor will reward you with a Tormentor’s Cache brimming with Soul Cinders and can also contain powerful equipment as well as a Bahmethra Chain Link. Binding enough of these chain links will allow you to summon an eerie mount, the Hand of Bahmethra. 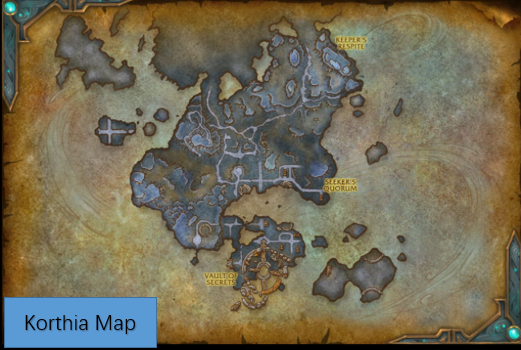 9.1 will add new areas to the Maw including Korthia, it’s currently unclear if Korthia will be an area or a separate zone.

Korthia, City of Secrets is a fragment of a long-lost domain pulled into the Maw by the Jailer, dragged from the hidden byways of the In-Between, this landmass has its own strange creatures and brims with mysteries the likes of which the Shadowlands has never seen. It is these obscurities that the Jailer is after, the secrets of an enigmatic group known as the First Ones.

If you watched the Chains of Domination trailer, Korthia is the giant landmass that the Jailer was pulling into the Maw using enormous, magic chains. Korthia will be the focus of the new campaign, with players exploring its ruins and meeting the few surviving citizens to discover more of the Jailer’s plans. Players will also uncover a system to counter the Eye of the Jailer, the Grand Theft Auto-esque ‘Wanted’ levels that eventually force you to flee the Maw after causing too much trouble. 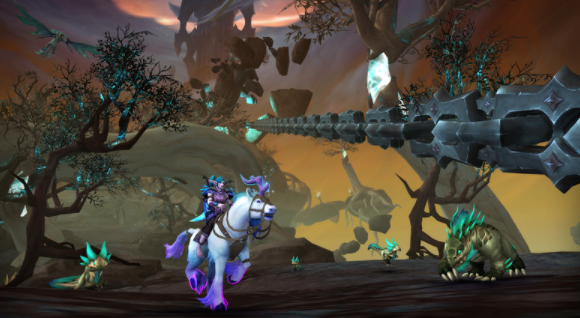 Korthia will be a new area for quests, exploration — and to break up the monotony of the landscape of the Maw. It looks like it will be the central point tying together the next phase of the Covenant campaigns. All four Covenants will work together towards a single goal, which will lead into the next raid, in Torghast. You’ll be able to use your ground mount in the Maw, and fly in the four Covenant-controlled zones outside of the Maw. By including the new area within the Maw, this allows us to mount there, but not fly — a nice compromise for a new questing area.

In the World of Warcraft Patch 9.1 What’s Next Panel, Blizzard has announced the new zone: Korthia, the City of Secrets! dragged from the hidden bryways of the In-Between, this zone will include several new rewards for players, including a Spectral Steed mount, a Severed Hand mount, and more!

Heading back into this area will allow us to explore all of these new sections, entertain new content, meet new allies, and face off against new foes. And in addition, we will also see some brand new rewards. Some of the new rewards we’ll find within the Maw include this Maw-themed undead horse and a Maw Hand mount that is actually a giant severed Hand of Domination that you will ride on the wrist section area, in a really creepy and cool manner. And of course, there will be Maw-themed Maw battle pets to collect as well, including your very own minion of domination.

The In-Between is a miasma of energies that separates and surrounds the realms of the Shadowlands as well as a parallel reality to each realm that can be entered through rifts. It is vast, but far from empty. It is inhabited by both wondrous and terrifying beings and is said to hold many secrets, but it is a chaotic place that few can navigate and few have ever explored. The In-Between is presumed to be the home realm of the devourers. There are several lost land masses in this place, such as Korthia before it was pulled into the Maw. The In-Between was once rich with streams of anima connecting the different realms of Death, but the current anima drought has caused the realms to become cut off from one another.

Players are sent through the In-Between on anima wyrms when they take flight paths between the different realms. In addition, the visuals displayed while a player is dead in the Shadowlands are meant to give the feeling that the character is half tethered to their body and half traveling through the In-Between.