Outland WoW How To Get There

Outland is the shattered floating remnants of the destroyed world of Draenor, the homeworld of the orcs and refuge of the draenei. After the sundering of Draenor, Outland was thrown partially towards the Twisting Nether, and is now in a constant state of degradation.It became the domain of the pit lord Magtheridon, who was eventually deposed and replaced by Illidan Stormrage until his death at the Black Temple.

Portals to the Blasted Lands should appear nearby portals to Hellfire Peninsula (Stair of Destiny).

In the Portrait Room (lower level of Aegwynn’s Gallery in  Dalaran over Broken Isles), there is portal to Shattrath City for both factions.

Before Draenor was torn apart by the portal rifts, it was a vast planet of continents and seas, much like Azeroth. When the world was destroyed it was tossed towards the Twisting Nether. It no longer had its sun, but its moon, the Pale Lady still hovered looking far larger than it ever did before. Other spheres now existed as well, including a rosy one, and a smaller light blue one. This may be partially wrong as the sun and sunlight were later described to be present.

The damage to the world had sundered reality, gravity, space, and even time may not even function properly. 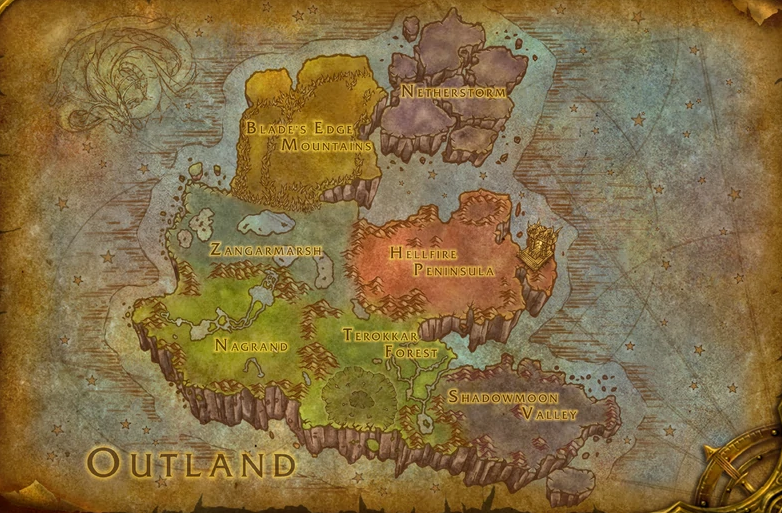 In World of Warcraft: Illidan however, Illidan describes Outland as “a tiny speck in the infinity of the Great Dark Beyond”.

This may just have been an oversight as previous sources and the game put Outland fully shrouded by the Twisting Nether. Later, World of Warcraft: Chronicle Volume 3 described the state of Outland with barriers between Draenor and the Twisting Nether being collapsed, leaving open paths to all the various corners of the cosmos. However, it is also worth to note that demons that died in Outland (such as Kazzak and Ambassador Hellmaw) did not die permanently as they should when dying in the Nether. As such, it can be speculated that Outland is not fully shrouded in the Nether.

Outland currently consists of seven large zones that connect to each other but differ sharply in environment.

Getting to Outland is not very difficult for a level-appropriate character. Before you go through the Dark Portal, you must have the The Burning Crusade Expansion Pack installed.

You also may have a mage friend offer to port you to Shattrath once you are of level for Outland. Though there’s no harm in doing so, the quest progression for Outland starts at the Dark Portal so it is suggested that you first enter through there.

Getting to the Dark Portal

When you arrive in Outland, you will automatically have a flight path to Honor Hold, which will be your main quest hub for early Hellfire Peninsula. In Honor Hold, you can find quests for Hellfire Ramparts which is part of Hellfire Citadel, and is the first instance in Outland.

Getting to Shattrath City

There is one Capital city in Outland, Shattrath, which is a neutral city open to both Horde and Alliance.

To get there, you can either cross Hellfire directly west to Zangarmarsh and then follow the road south to Terokkar (you cannot miss the city when going this route, it’s very obvious), or you can take the southern exit from Hellfire into Terokkar Forest, and then turning west when the road does.

There are two Inns in Shattrath, one on Scryer’s Tier and one on Aldor Rise. On your first visit you can set you hearthstone at whichever you wish as you will be neutral with both, but once you choose either the Scryers Faction or the Aldor Faction (the other will not like you anymore), you should set your hearthstone to the matching inn.

In the Blasted Lands, go south to the Dark Portal and take it to Hellfire Peninsula; if lv. 58, the quests available will lead you to the Thrallmar encampment. You will not be able to pass through the dark portal into Outland unless you are level 58 or above.

NOTE: There is now a portal to the Blasted Lands by the Mage Trainer in Orgrimmar

From Falcon Watch in Hellfire Peninsula, follow the path west past the Cenarion Post and Thornfang Hill to reach Zangarmarsh. Continue following the path to reach Cenarion Refuge.

From Zabra’jin in Zangarmarsh, follow the path curving from west to south, down to Nagrand. Stay on the path SE/E until you reach the Horde encampment of Garadar.

(Recommended) From the Shattrath City in Terokkar, follow the path south into the Bone Wastes. Take the path that exists west from this dead land, and follow it northwest into Nagrand.

From the Cenarion Refuge in Zangarmarsh, using the path, go north, northwest/west, then north past Telredor. You will eventually reach Blades’ Run in Blade’s Edge. Continue north into Thunderlord Stronghold.