It’s been almost four weeks since Path of Exile: Delirium launched and so we wanted to take a look at some Delirium statistics. Today, we’ll be giving you an inside look at just how players are faring with both Delirium Orbs and the Simulacrum!

First, let’s take a look at how players are using their Delirium Orbs. 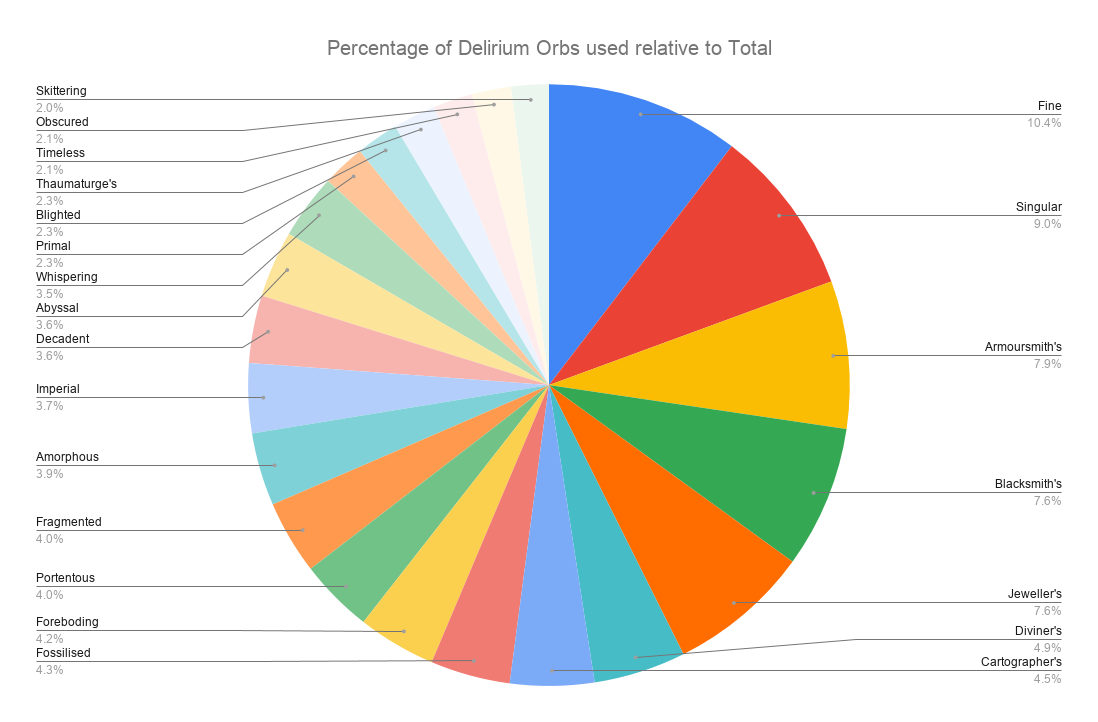 Next, let’s take a look at a breakdown of how many Delirium Orbs are being used on Maps. 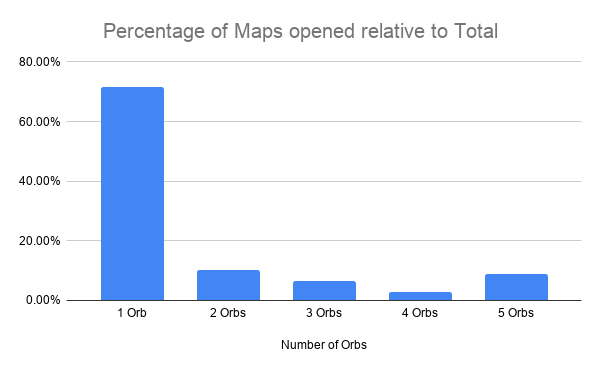 As you can see, the most common case is that players use a single Delirium Orb on a map, with about 70% of all Delirium-Orbed maps having just 1 Orb applied. This makes sense as many players will cautiously dabble in Delirium Orbed maps to feel out their difficulty. My guess is that successful players are quick to ramp up the amount of orbs used on a single map. This is clear as the number of 5-orb maps run is higher than that of 3-orb or 4-orb maps. One of the possible explanations for 5-orb maps being as popular as they are is that once players are able to successfully complete 5-orb maps, they’re unlikely to do anything other than 5-orb maps from then on.

With all of those maps being opened, just how many deaths are occurring in each? Let’s take a look, shall we? 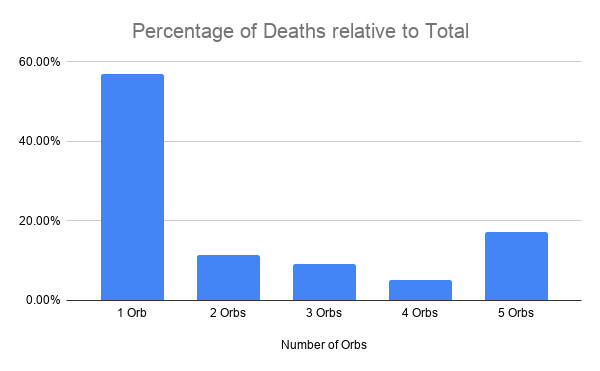 Percentage of Deaths relative to Total

That’s a lot of death! Leading the charge with most deaths is 1-orb maps, with just under 2.8 million deaths! Following that, we see that 5-orb maps have the next most deaths; just shy of a million. 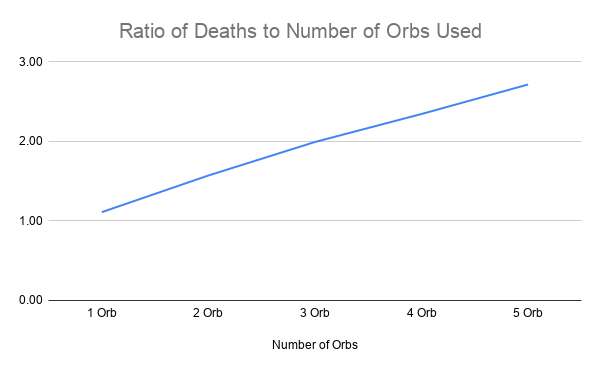 Ratio of Deaths to Number of Orbs Used

This does a good job of showing a relatively linear increase in the number of deaths as the number of orbs applied to a map goes up. 5-orb maps are no joke!

Now that we have taken a good look at Delirium Orbs, let’s switch it up and take a look at how players are faring in the Simulacrum. We’re going to look at a breakdown of waves started by wave number, and will also look at completion rates for a given wave (as well as how many players are able to complete all 20 waves of the Simulacrum). 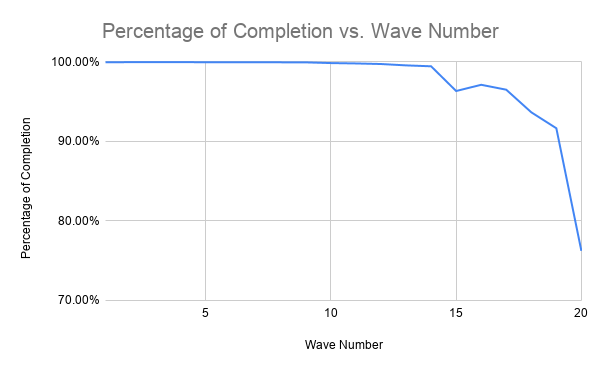 Percentage of Completion vs. Wave Number

Right off the bat, we can see that 813,604 Simulacrum areas have been opened to date. We can see that there is a very high rate of completion for many of the early waves.

Completion rate does take a noticeable dip at wave 10 thanks to the fact that Omniphobia, Fear Manifest can start spawning, though the completion rate remains extremely high.

At wave 15, we see a big dip (relative to previous completion rates). This is likely related to the fact that wave 15 guarantees Omniphobia, Fear Manifest will spawn if they haven’t already spawned and also introduces a chance for Kosis, The Revelation to spawn; Delirium bosses are quite difficult and present the first major challenge of the Simulacrum. That said, the majority of players are able to venture onwards after wave 15.

Things become much harder as players get to wave 18, where an increased chance for bosses to spawn, alongside increasing Deliriousness, becomes a major factor.

Wave 20 guarantees that Kosis, The Revelation will spawn if it hasn’t already. As we can clearly see, this boss, combined with maximum Deliriousness, presents a significant challenge, where only 76% of players that attempt wave 20 successfully complete it.

If we compare the total number of successful wave 20 completions (463,491) to the number of Simulacrums started (813,604), we can see that 57% of Simulacrums that are started are successfully completed. While this seems like a low number, it’s important to note that being unable to complete wave 20 just means that you miss out on rewards from that wave, rather than the entire area.

Finally, let’s take a look at challenge completion rates in the Delirium league. The graph below shows what percentage of players have how many challenges and only includes accounts that have completed at least one challenge. 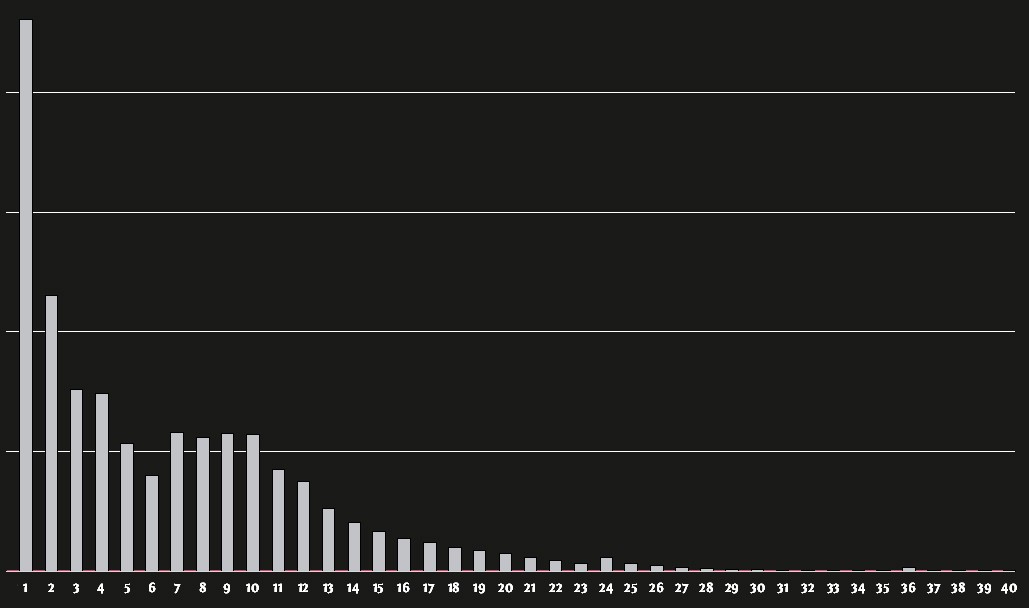 Percentage of players have how many challenges

We hope that you’ve enjoyed this inside look at our Delirium statistics. As always, we know all your secrets. Nothing is hidden from our view. I mean, stay tuned for more Delirium news posts later this league!