Devastated by the Burning Legion’s past invasion, these vengeful outsiders offer their aid to Azeroth’s factions off-world in Outland. Survivors of the Burning Legion’s devastating invasion during the Third War, the powerful Blood Elves seek revenge on the demonic invaders who slaughtered their people and corrupted their beloved font of power, the Sunwell.

Following the defeat of Illidan in Outland, Kael’thas – bristling with power from his Manaforges in Netherstorm – finally returned to Quel’Thalas. Seeking to summon the demon lord Kil’jaeden, Kael’thas captured the personification of the Sunwell’s power: Anveena. Kael attempted to summon Kil’jaeden into Azeroth using the reignited Sunwell as a portal. This was prevented by the actions of the Shattered Sun Offensive, a group of heroes charging into Sunwell Plateau and finally, the sacrifice of Anveena, who used her power to prevent Kil’jaeden’s emergence.

The battle with Kil’jaeden once again left the Sunwell without power. However, Velen appeared shortly thereafter and used the “spark” of the naaru M’uru’s to reignite the Sunwell. This restored the Sunwell using the energies of M’uru, the Sunwell’s new energies being derived from both the arcane and from M’uru’s powers of the Light. 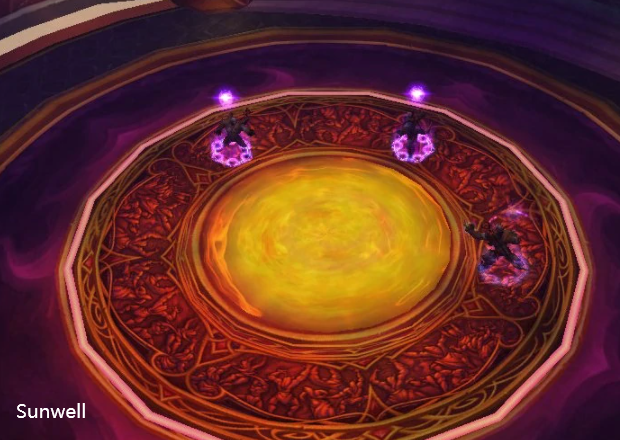 The Sunwell during the attempt to summon Kil’jaeden; Anveena held in suspense above it.