The Hoarder is a divination card. A set of twelve can be exchanged for an Exalted Orb. 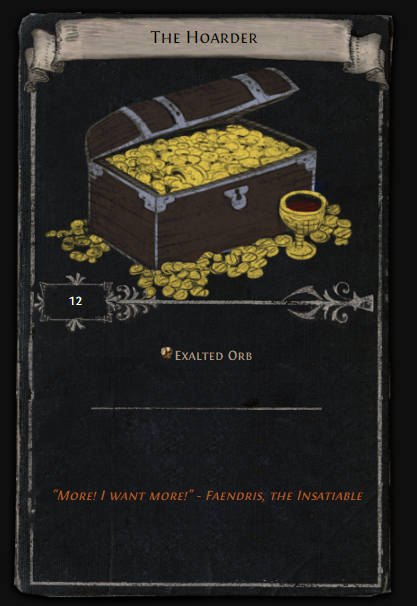 How to get The Hoarder

It is an area in Act 4. It doesn’t have a waypoint and is connected to The Crystal Veins and The Belly of the Beast Level 2.

It is an area in Act 4. It doesn’t have a waypoint and is connected to The Belly of the Beast Level 1 and The Bowels of The Beast where you will find Piety. After defeating her you can move on to The Harvest.

It is the final area of Act 4. It contains a waypoint and is connected to The Belly of the Beast Level 2. Its sub-area The Black Core is dedicated to the fight with Malachai, The Nightmare and can be accessed once the three other bosses have been defeated.

It is an area in Act 9. It is connected to The Belly of the Beast. Vaal side area has a chance to spawn.

Is it worth farming for The Hoarder div card

If you are doing the runs anyways its just an added bonus. Not worth just running only for the card and killing no bosses. I did it for the challenge. All 12, got 3 the offering as well. 20 hours split in 3 days.

1600/175 = 9.14
That means even assuming the hoarder can drop anywhere (which is unlikely), this card is basically useless.

TLDR; There’s no reason to go out of your way to farm The Hoarder.

Please note that drop rates from different categories of items are not comparable. For example, the drop rate of the Scroll of Wisdom is as rare as a mirror if you compare them that way.

I’ll get the drop rates removed from the client. There’s no reason for them to be there. People misinterpreting them and posting false statements that other people will interpret as facts are very dangerous.

So getting straight into it I thought I would give Vault a shot simply to find out how often The Hoarder cards dropped for me in 100 maps. I did the runs with 53% IIQ and a Biscos at 44% with Winter Orb as my clear skill. The only currency invested into the maps was an Alchemy orb each run. I have logged pretty much everything I could think of.

Before we get into the loot I would just like to summarize by saying that I really enjoyed running Vault and I might actually continue farming it at some point simply because the layout is great making the map very fast to run (you can view an example of the layout below). You feel rewarded because of the consistent drops such as The Hoarder cards as well as general currency from a fast map meaning you quickly see your currency pile up. On top of that, you also have a chance at the Immortal Resolve card dropping. On the flipside, the map itself felt rather hard to sustain so only investing an Alchemy you will most likely run out of maps at some point. You have pretty much two options here — you can go buy extra maps to cover yourself through any ‘dry’ periods or you can go do higher maps (T11 + ) to get a decent amount of drops if you have shaped your atlas towards Vault.

Thank you for reading, I really enjoy running different maps and taking note of how profitable they are and it’s great to write it up on here and share it with you all! If you have any questions please let me know!

- I have previously run 100 Museum maps and recorded my findings the same way in another post. Comparing the two maps the profit is similar (if you take away a few of my lucky drops this time around) but the time spent running them was very different, Vault has taken around half of the time to complete the 100 maps so for me, Vault has been the most profitable and it would be the one I would recommend out of the two. -

Picture of the loot!

Example of the layout

Let’s start out with the divination cards:

The Rite of Elements: 6

I did find a few cards from other sources which I feel is more random as it depends on the strongboxes etc that you find, they are as follows:

The Valley of Steel Boxes: 1

In map 36 I had the first Exalted orb drop

In map 47 I had a Cartographers Strongbox

In map 71 I had an Essence Worm drop

In map 95 I had a Kaoms Heart drop

Total profit was around 890 Chaos but I feel like I did get a few lucky drops, so by removing the 2 Exalted drops and the Kaoms Heart we end up around 460 Chaos which I feel is a more realistic number!

TLDR — I ran 100 Vault maps down to at least 10 mobs in the map and opened all chest on my path. The maps were done with the alch and go style with 53% IIQ and Bisocs at 44% with Winter Orb as my clear skill. The total profit was roughly 891 chaos which was mostly due to amazing luck getting 2 Exalted drops + a Kaoms Heart! Without those drops, the map comes down to a more realistic number of around 460 chaos. The map layout is great and is very fast to run as there is no real backtracking and it quickly became one of my favorite maps to run! It is quite hard to sustain a decent map pool if you choose not to put any extra currency into sustaining the map.