Area 52 is a neutral goblin-run town found on the southwestern most island of Netherstorm. It is a settlement structured much like Gadgetzan and Everlook, with a short wall surrounding a small hovel of buildings. The goblins are seen building a rocket ship to journey into the Twisting Nether named the X-52 Nether-Rocket. 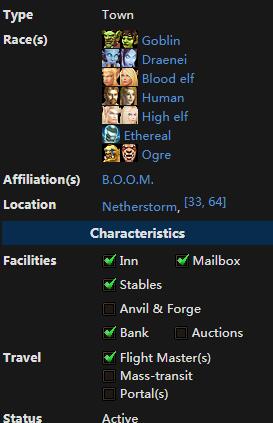 Anchorite Karja says: With all due respect, A'dal sent us here to investigate Kael's activities, not mount a full-scaled attack.

Spymaster Thalodien says: Look, sweetheart. No one's talking about storming Tempest Keep ourselves, but when we see a target of opportunity we have to take it.

Exarch Orelis says: Hold your tongue, Knave! Do not dare use that tone with a priestess of the Light!

Anchorite Karja says: The magistrix will be happy to know I'm fluent in Thalassian. Your courtesy is not lost on me.

Anchorite Karja says: Back to the topic... we should focus our attention on these manaforges. We need to learn what the enemy is doing with them and why.

Magistrix Larynna says: We've told you all there is to know! Do you forget that many of us used to be trusted followers of Kael'thas?

Spymaster Thalodien says: ...and just look at where that got us!

Exarch Orelis says: Even you must admit that your information from defectors is outdated and unreliable. Let us make calculated attacks on these manaforges and gather what information we can.

Spymaster Thalodien says: Finally, some talk of action from the big guy!

Area 52 has a few references to the outside world in it. The name of the town itself is a reference.